The Department of Energy [DOE] investigates how the river as natural occurrence influences the human environment both physical and cultural. Providing for fresh water, infrastructure, trade routes, borders and hydroelectricity, the river has become vital to the human environment. Water currents are worshipped through various religions and mythological narratives, varying from all around the globe. The Department of Energy translates the physical places of the river valleys into audio experiences, supplemented with background and contextual understanding. The design takes an editorial approach, supplementing the audio experience – that liberates the river from its physical limitations – with background information on the local environment, tradition, nature, folklore, and mythological. The project resulted in an ever emerging visual identity and the Aghavrick Acid compact disck album that was released on the 10th of July 2020.

Visual communication (often unconsciously) heavily relies on symbolism. My bachelor thesis is a dichotomous exploration of symbolic language that investigates; (1) the transition from origin and physical application towards visual representation, and (2) the shift in meaning of symbolism. The research is conducted through the case study of the laurel wreath, a symbol internationally applied to represent victory, unity and peace. The origin of the laurel wreath can be found in Greek mythology, in a story in which Apollo’s undesired love results in a transformation, followed by the total destruction of his concubine. It is in the Roman tradition that the laurel wreath acquires the status of Corona Civica – the civil crown – an honour that can only be achieved through military conquest. The origin of meaning aims at a specific interpretation of victory, namely through destruction or domination of the other. Nevertheless, the same visual rhetoric is applied for peace keeping organisations such as the United Nations, anarchists counter movements like Anonymous, fascist, nationalists but certainly also commercial driven companies like Fred Perry. Napoleon himself preferred the civil crown over the crown of Charlemagne during his coronation in 1804, and Beyoncé reminds us of this rhetoric in her 2018’s music video of Apes**t.

The continuous aim to create open accessible work resulted in an experiment in which the entire design of the publication is generated by an online css script. The thesis is completely accessible online through Github, where the publication can be generated via the print command. (please consider that the prototype has been created to function on chrome and may result into error if used on another browser) 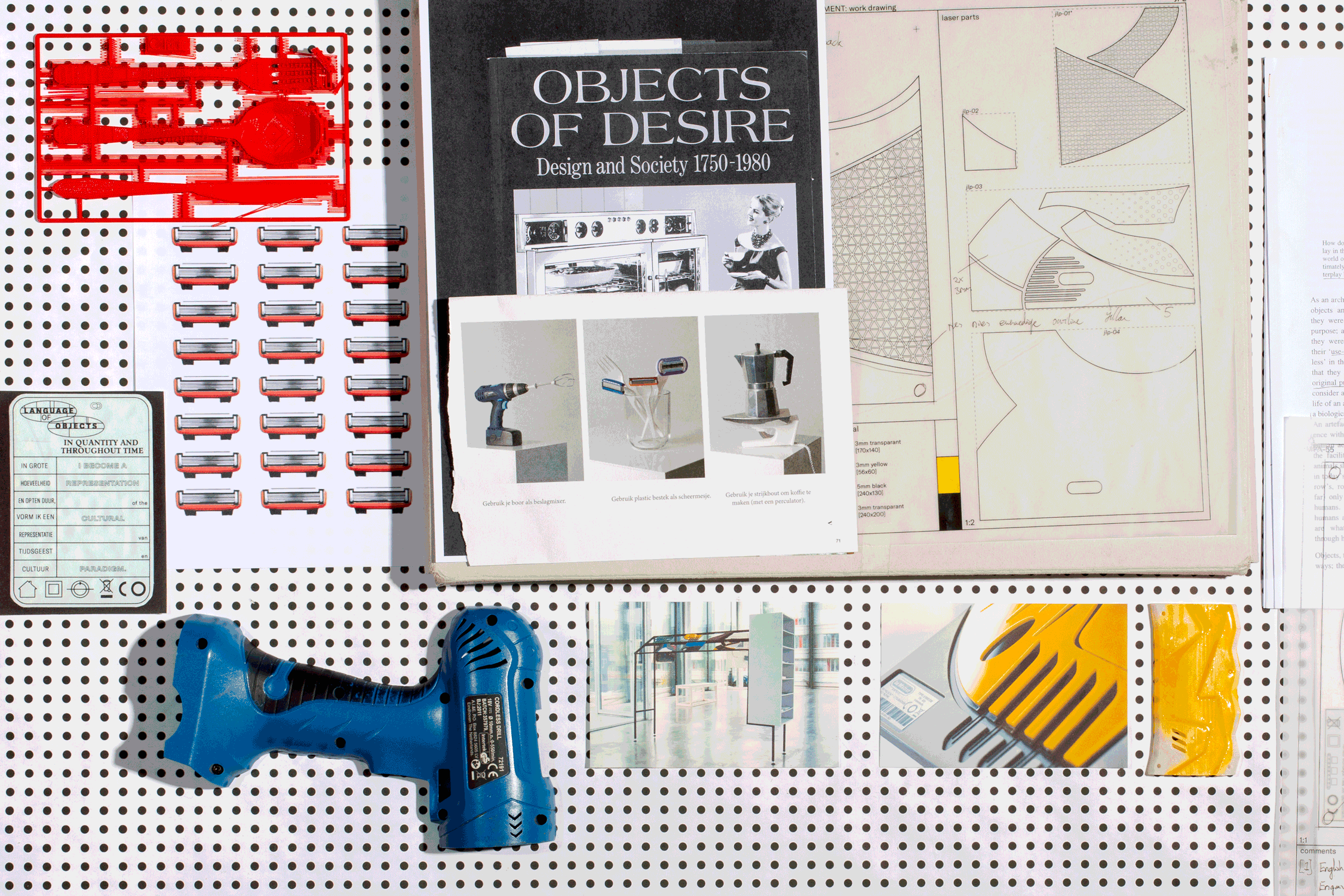 Even the simplest and most ordinary of user objects represent the cultural environment in which it is shaped, used, desired and created. The elements composing the object – visual appearance, method of production and materiality – can be understood as signifier and representation of cultural values. This is the language of the object.

The designed (research-) plates enhance contemporary aesthetics and function as ornamental fragments to exposes utilities as cultural representations. Epigrams are blended into the native typography of the object, namely the production labels. These labels form the DNA of the object, its origin, country of production, copyright ownership and material components. The labels are repurposed to supplement a narrative that guides towards an understanding of the language of objects.

Special thanks to Silvio Lorusso, Jan Robert Leegte and Thomas Buxo for guiding the project.

[X]
Pirate Reader: On Mobility, 2016. The Pirate Reader: on Mobility aims to contradict the ownership of knowledge and scanned & shared limited access publications through online and printed format.

Pirate libraries aim to share publications with the ideology to make knowledge accessible to all. The internet itself has been created with the intention of sharing information and therewith have the exceptional potential to obliviate (physical-) borders and transform the ownership of knowledge into an obsolete concept. The Pirate Reader: on Mobility is an attempt to join and support that effort and ideology in provocation against the privatisation of intelligence. The material concerning the topic of mobility, in ownership of the Royal Library in The Hague (Koninklijke Bibliotheek) – accessible only due request and solely to be inspected at the reading halls of the Royal Library itself – was collected and scanned manually and reorganised as one. The collection of sources, publishers and various authors are distilled into one publication on Mobility, shared through online and open source platform Github and in printed format on Lulu (and downloadable through the webpage), fully typeset in Liberation Mono, a typeface designed by Steve Matteson, registered within the Open Font License. Special thanks to Thomas Buxo for guiding the project.

[X]
The Anthroposcent: Pramantha, 2018. The proposal for the fragrance Anthroposcent is the odour of a geological epoch, determined by mankind.

The Anthroposcent is the branding proposal for a fragrance based on the exquisite minerals of the new geological epoch proposed as the Anthropocene – an era in which mankind is to be considered the most influential aspect of environmental change. The project is an embodiment of research into the topic of the Anthropocene and uses contemporary commercial (visual-) language to engage into a teasing meaningful flirt with ethics of the industry. It aims at the connection between luxurious products and scarcity of natural ingredients, and is reaching out within its own intonation for ways to communicate a message of social, political and environmental relevancy.

Special thanks goes out to Hamish Gardner, Alec Mezzetti and The Beautiful Meme for the support and guidance of the project.

[X]
Models for Humanity: Tourism & Terror, 2017. The forensic tour provides a dualistic understanding of a landscape as both holiday destination and crime scene.

Known as paradise by tour guides and travellers, known for human right violations by Amnesty International. Popular holiday destinations such as Indonesia often provides a landscape of conflict. This project dives into this duality by a forensic attempt to restage the traces of a crime against humanity. Commissioned by Amnesty International, in collaboration with Frank Hemmekam, we located the crime scene of one of Amnnesty International’s priority cases and recreated the scene using a 3D modelling software. The tour through the crime scene is supplemented by a tour-guide maintaining the friction between tourism and terror. This project was part of Models for Humanity commissioned by Amnesty International, executed in collaboration with Frank Hemmekam and guided by Lauren Alexander & Niels Schrader.

A collection of various projects, posters and commissions.

Beer released during the Covid-19 pandamic to support local pubs and the monastry brewery De Haagsche Broeders. Typeface by Daan Jesper Kars and image by Den Haag To Go!

Earthquake war-map designed for Groningen (NL) – pictures by Liza Szabó in collaboration with Wannes Vrijs and hosted at Waag Society in Amsterdam.